Adelicia Acklen’s Belmont estate was known for its grounds and gardens. In addition to the stunning landscaping, guests were amazed at the two-hundred-foot long greenhouse and conservatory. Adelicia’s third husband, Dr. William Archer Cheatham, was very interested in horticulture and took great interest in the Belmont gardens. The 1860s and 1870s saw great interest in horticulture, which included elaborate public exhibitions and detailed reports of arrangements featured in local newspapers. As a result, gardeners were held to the status of modern day rock stars during this period of plant mania.

Below is a list of plants that were exhibited from Belmont. While the Latin names may not be the ones used today, they are copied from period newspapers. Some spellings have been changed to conform to 21st century usage. When the same plant was exhibited the second time it is not included in this list. Comments featured in parentheses feature possible names for each plant. 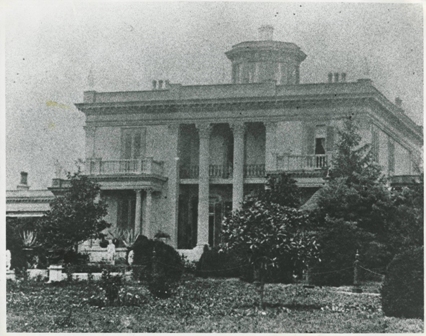 Plants Exhibited at Horticultural Fairs and other Expositions

In one of the hot beds:

Deutzia gracilis (A shrub native of Japan and China. Related to the Philadelphus or mock orange)

Caladiums, one having a broad green leaf, spotted with red and white

Maranta (a genus of houseplants)

Plumbago (could be leadwort)

Other Plants listed in Period Publications:

The Tennessee Flora; with Special Reference to the Flora of Nashville Phograms and Vascular Cryptogams

Member of the American Association for Advancement of Science

Published by the Author

Allium sativnm Lilaiavceve. Introduced in the grounds of Mrs. Cheatham, (Belmont) and at an old cemetery in Nashville. June. (Allium is in the onion family)

“Few places in the South can boast of more attractions in this way than Bellemont, the elegant residence of Dr. and Mrs. Cheatham, formerly Mrs. Acklin. The conservatory, built of iron, is truly a Crystal Palace, with its high dome and spacious wings. Each department is filled with costly exotics, rare and beautiful. One Norfolk Island Pine, standing over thirty feet high. The collection of Camellias is very fine. Many of them are large plants, more than fifteen years old, and are covered with flowers. Near this is the stove, where some of the largest palms in the State are shown. The variety of tropical plants displayed in this house is large, and reflect great credit upon the skillful gardener, Mr. Gray. A house for forcing grapes adjoins this. The beautiful lawn is studded with arbors, elegantly designed in iron; while statues and ornaments mark the refined taste displayed in every part of the grounds, and give a charm to the place.”

Plants Exhibited at Horticultural Fairs and other Expositions

Various secondary sources reveal descriptions and memories of plants that were located at Belmont and their relative location on the property.

- Along the sides of the flagged stone walk leading to the front steps of the house were rows of candytuft, scarlet and white geraniums, and boxwood.

- The urns at the end of the walk contained agave plants

- Urns on the front porch contain vines of Russelia

- In the pool of the fountain was Victoria Regia water lily [This would have been impossible since this plant requires a much large body of water.]

- Cereus and a cacti collection

- Also, winter grapes were raised in the Greenhouse as well as wax plant that cover many feet of the wall

There were also beds of lemon trefolio, heliotrope and verbenas along with the rose garden and tulips

The Drive from Hillsboro Pike was line with red cedars and magnolias.

The Fashion of Adelicia Acklen